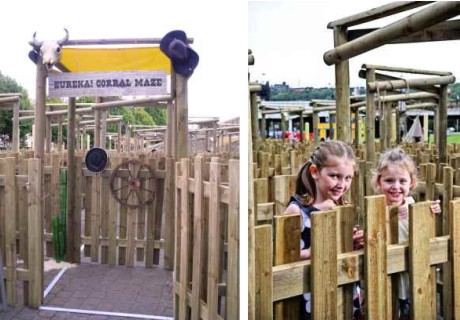 Mazescape were asked to design and install a portable maze for an event at Eureka! in Halifax, West Yorkshire. The maze was to be designed with a rustic western theme and erected outside the main entrance for a period of six weeks during the school summer holiday.

– The Brief – We were commissioned to produce a temporary, portable maze on the theme of The Wild West. The maze was to operate for up to six weeks during the school summer holidays and act as an novel attraction to drive footfall to the site. Additionally, the maze would provide opportunities for a range of unsupervised free play as well as supervised activity throughout the summer, led by Eureka! staff.

The maze would be installed onto an area of block paving in the play area adjacent to the main entrance, an area over-viewed by the railway station and station car park. The area was a long triangular shape in plan, bordered on one long side by the approach to the main entrance and on the other by a grass bank. A row of lighting bollards ran along the bank and would need to be incorporated into the design.

– The Stucture – The maze design was conceived as the first of a new generation of temporary portable maze attractions. We were keen to create a maze that could be erected by a minimal crew in one day and be flexible enough to deal with the huge variety of site and layout issues that might typically arise.

To maximise the range of locations in which the maze could be installed, we decided to create a structure that would be freestanding and require no ground fixings. The structure would be modular and constructed from weatherproof softwood, sourced from sustainable supplies to be finished in a number of different ways according to theme and location.

So Timbamaze was born! – Probably the best feature of Timbamaze is its adaptability, allowing installation in a huge variety of spaces both outside and inside buildings. The mazes unique construction method is fully modular and self-supporting so does not require any ground fixings, allowing it to be installed onto paving, concrete, asphalt or grass without causing damage to the surface. We have subsequently installed mazes into shopping malls with polished marble floors without damage.

Timbamaze can be built in a square or rectangular form however the beauty of the system is that it is simple to install into awkward or irregular spaces, between other structures or within buildings making it very versatile for year round attractions. Fixed obstacles such as columns, bollards and lighting poles can easily be accommodated within the maze and can even become thematic features.