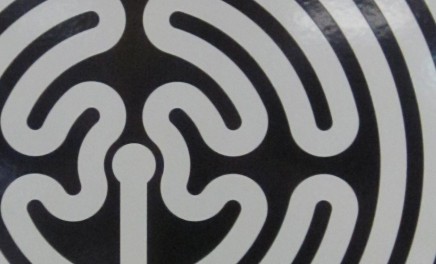 Mazescape were asked to create a series of 270 Labyrinth designs for a major new artwork by artist Mark Wallinger, commissioned by the Transport for London Art on the Underground project to celebrate the tubes 150th anniversary.

Outline – Mark Wallinger, one of the UK’s leading contemporary artists, has created a major new artwork for London Underground to celebrate its 150th anniversary. The result, commissioned by Art on the Underground, is a multi-part work on a huge scale that will be installed in every one of the Tube’s 270 stations. Wallinger sees the commission as a unique opportunity to explore the potential of the Underground as a whole. Wishing to forge a poetic link with the Tube’s rich history of graphic language, he has made a work that sits comfortably alongside the two of its major design icons, the roundel and Harry Beck’s Tube map, and yet stands out as a new symbol marking the Tube’s 150th year.

The Brief – We were approached by Art on the Underground to assist with this huge scale project, an artwork that would cover the whole of the London Underground network, with a unique presence in every one of 270 stations. No project of this type has ever been attempted by any maze designer, so we were keen to become involved.
The key to the project from a designers perspective, was that all 270 designs needed to be unique in terms of the journey that is described by the pathway through the labyrinth. This was a crucial part of the vision Mark Wallinger had for the artwork and formed a central plank of our development work.As we were working in unknown territory, we focused initially on a structure for the project based around the nomenclature of the labyrinth designs. We needed a way to define a labyrinth journey from its start at the outside of the circle to its end at the centre. We achieved this task by using a sequence code that would ensure we could compare designs and guarantee all 270 labyrinth were unique.

Style – To add variety and in addition to the uniqueness each labyrinth journey, we also designed twelve family types for the project with graphic styles inspired by examples of historic labyrinths from around the world. The families were as follows:

1. Cretan – From the ancient world and the purest form of Labyrinth design; 2. Medieval – Inspired by examples from the great cathedrals of Europe such as Chartres, France; 3. Woodcut – From ancient carvings on timber in Scandinavia; 4. Modern – Defined by a narrow path with rounded square turn-backs; 5. Emboss – Narrow path outlines that set up a resonating visual field within the design; 6. Organic – A flowing pathway with no sharp turns; 7. Native American – Traditional Tohono O’odham and Navajo symbol; 8. Turf – From traditional cut turf labyrinths of Britain; 9. Square – A squared off form of turn design; 10. East – A thin pathway and square central goal; 11. Opposed – Defined by an opposed rounded and square character at turn-backs; 12. Chamfer – Defined by a unique form of chamfered turn-back

“Angus and Tom, Mazescape have been generous collaborators, their wealth of knowledge and expertise spanning design and production has enabled the vision for Labyrinth, a major commission for the Tube by Turner Prize winning artist Mark Wallinger to be realised across the entire Underground network”