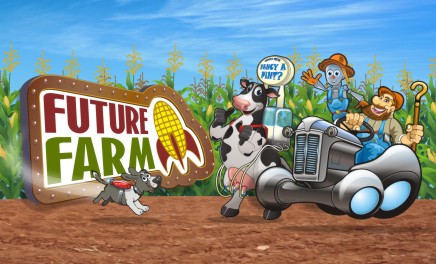 Another busy year at Mazescape

This year we produced maze designs and fun maze games on a number of themes including; Future Farm, Maze Trap, Maze of Illusions, Wild Scotland, Knight School, Jungle Bungle, Monarchs in the Maze and Follow the Swallow!

Future Farm – Farmer Eli is causing a fluster on the farm this summer. His crazy farm inventions have been revealed … but which ones are real and which are just plain bonkers! Choose the best inventions to create your very own farm and lead the way to the Future…

We were been asked by a number of maze operators to ‘bring the maze back to the farm’ this year and develop a theme based on farming. Future Farm explores the possible future of farming based on developing technologies and informed by current debate. We incorporated a number of unusual technologies in the game including; insect farming for both protein production and pest control, solid state fermentation for the production of alternative feed and enzymes, algae and fungi production, biomass refineries for fuel and energy production, ‘pharming’ for biotech industries (growing engineered plants for medicines, etc), animal psychology and geoengineering.

We created a fun farm construction game where players had to locate technologies in the maze field, collect them by stamping symbols into their game card to gradually build up their very own Future Farm.